Mashed Up: Music, Technology, and the Rise of Configurable Culture excerpt (reblogged from BoingBoing):

The biggest myth of all is the Romantic notion that artists somehow create their work uniquely and from scratch, that paintings and sculptures and songs emerge fully-formed from their fertile minds like Athena sprang from Zeus. Running a close second is the myth that only a handful of us possess the raw talent – or the genius – to be an artist. According to this myth, the vast majority of us may be able to appreciate art to some degree, but we will never have what it takes to make it. The third myth is that an artist’s success (posthumous though it may be) is proof positive of his worthiness, that the marketplace for art and music functions as some kind of aesthetic meritocracy.

Of course, these myths fly in the face of our everyday experience. We know rationally that Picasso’s cubism looks a lot like Braque’s, and that Michael Jackson sounds a lot like James Brown at 45 RPM. We doodle and sing and dance our way through our days, improvising and embellishing the mundane aspects of our existence with countless unheralded acts of creativity. And we all know that American Idol and its ilk are total B.S. (very entertaining B.S., of course!). Each of us can number among our acquaintance wonderful singers, dancers, painters or writers whose creations rival or outstrip those of their famous counterparts, just as each of us knows at least one beauty who puts the faces on the covers of glossy magazines to shame.

Back in the olden days before recording, copyright was shorter and sloppier and musicians repurposed one another’s work aggressively. 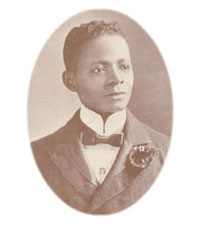 Goodnight Irene” is closely related on the 1886 tune Irene, Good Night by Gussie Davis. (Gussie Davis in the Library of Congress).

The ability to swipe made songs better. A new song would take the best elements from source songs and add some parts of its own. Following songs would pick out themes and ideas from that new song. Over time all the songs in the lineage benefitted.

Lead Belly was singing a version of the song from as early as 1908, which he claimed to have learned from his uncle Terell. An 1886 song by Gussie L. Davis has several lyrical and structural similarities to the latter song, however no information on its melody has survived. Some evidence suggests the 1886 song was itself based on an even earlier song which has not survived. Regardless of where he first heard it, however, by the 1930s Lead Belly had made the song his own, modifying the rhythm and rewriting most of the verses.

2 replies on “mashed up”

Your blog is just excellent. I have somehow managed to kill most of a day or work looking at it. Oops. Great job, and great picking.

Steve in SC, thanks! That is a great pat on the back.